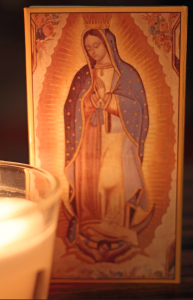 The other day I saw someone wearing a shirt that was bright neon green. On the front of the left breast, was a word I couldn’t quite read. The text was laid out in a way that made the word look like AMY TH. I was having a conversation with this person and at the same time was trying to work out what the letters meant. “Why was my name on her shirt?” “What does that say.” And then the letters came in and out of focus and the words finally appeared. A MYTH. And for the first time in my life I realized my name was in A MYTH. It was a message from the myths themselves. I’ve been studying myths in my own time for over 12 years now and I could probably say that most of my life has been dedicated to studying myth, or maybe the myths were studying me.

When I was small I would walk through my small town, from the far end where my house was, to the swamp, to the woods, from blackberry brambles to tall weeds and the Mill Pond, Cromaine Library, The Village Market, to the cemetery. The cemetery was one of my favorite places. In the cemetery, there was no sound, I couldn’t hear my brothers and sisters, no one hits you in the cemetery, no yells, and no one cares that you are not where you are supposed to be, which is usually wherever you are. So, before leaving the house I would get two slices of American cheese and 8 saltine crackers, put them in a paper towel, hide them under my shirt so no one would ask what I was doing or where I was going and I would run. Run, run as fast as I could – to the cemetery, down the back dirt path, down Henry street, along the painted black wrought iron fence on the outside of the cemetery, to the back entrance, down a short pathway, to a statue of the Virgin Mary. She stood facing me, with her arms held out as if she wanted me to be there. As if she welcomed me. I’d sit down on her concrete pedestal and open my feast of cheese and crackers and give one to Mary and one to me. I would tell Mary all my worries, which were many, even at that time. She was someone I could talk to. Where I could pour out all the things that I could not feel, that I could not hold inside of me any longer, and for a moment, feel better. After telling Mary my woes, I’d stand up, turn around, look up at her, her concrete face with sun shining on it, look down to the crackers and cheese left for her, say goodbye and run, run, run, off to some other place in town.

My family had no religion, although my Mother would tell anyone that would listen that she was Catholic, as if they couldn’t tell from the 10 kids she had given birth to. The only signs of religion in our home were in her bedroom, one cross with Jesus nailed to it, her rosary, and her communion bible, which were hidden away in her banged up jewelry box.  She had to deliver her communion in Polish, don’t you know? This is all I knew. She didn’t pass this religion on to us. I have no idea why and I never asked and I never told anyone that I shared these secret moments with Mary.

If I had been wise at the time – I would have seen that this was the beginning of A Myth of my lifetime. AMYTH, with my name in it. The Virgin Mother, the idea of the good Mother, the Mother Mary, my first altar, the anti-masculine, the divine feminine, where I offered food and my thoughts to the purest myth there is.

AND now I cannot un-see it. Whenever I see the two words together I know “I am a myth”. I have to laugh and almost squeal in delight because for me, this was a small sign from the universe that says, you’re on the right path. Keep going. You got it. GO!