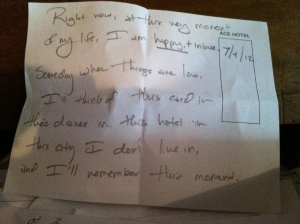 At one of the last places I worked, the creative founder, many times used Ezra Pound’s line – Make it New. One year it was turned around into Make it New. Make it Now.

For me, that changed to The Future is Now.

The Future is Now reminds me of – The Power of Now by Eckhart Tolle and When Things Fall Apart by Pema Chodron. The power and things falling apart are both about living now and feeling now rather than thinking about the future. This doesn’t mean the thought of the future should not be bright, but the brightest point in our future might just be now. In most moments there is an energy, a spark, a something that says – everything is okay – everything if felt right now is good. Even if it’s terrible.

I remember being in the middle of a panic attack – and I find those two words strung together so interesting – PANIC ATTACK. The panic is coming after me, but in truth, I’m creating it. So what would that look like in words? MY PANIC? I’m slowly killing my own self through worry?

Anxiety was attacking me and I thought about the Power of Now and to Pema Chodron. In this moment – I am – I thought to myself, I am what? I am terrified and I cannot control what is going on. That’s one thing, but what else? In this moment, I am still alive. There, that is better. It’s all I could cling to – the moment of being alive – standing at the edge of a cliff with a wall of anxiety behind me, in front of me, beside me and below me, but still ALIVE. HERE. NOW. Not being able to calm that shit down is the worst.  Learning how to reframe it is a gift.

I love Pema Chodron because this is how she reframes it: “Rather than letting our negativity get the better of us, we could acknowledge that right now we feel like a piece of shit and not be squeamish about taking a good look.”

I’m no professional when it comes to curing anxiety, but I am an expert at having anxiety and now – at taking care of myself through it. I’ve learned that much of MY anxiety and anxiety in general came from not living in this moment, but thinking the future would be better, instead of focusing on making now good – I’d focus on the tomorrow, the what if or the past. Those things were killing me.

I needed a set of tools to help with anxiety to look at my shitty-feeling self through a new lens. Tools that could change my mind, change my outlook, change my life. All very scary, because when I started to find those tools, to learn how to deal with anxiety – I also learned I had to deal with all the issues in my life that were helping create anxiety. Miserable job, bad relationships, bad ideas, drama, my attitude and my behavior. I realized that living a life that is not about living now – was not about living at all, but existing. I want to do more than exist. Taking good care of myself first, rather than taking care of my job, the people around me or anyone else was the key to actually being able to have a future.

Here is a list of few tools that I learned help me: (the audio versions helped me tremendously)

First find a therapist, an adviser, a friend, someone who knows about the kinds of things you are going through. It’s not always easy to find the right one, but it’s worth it.

Eckhart Tolle: The Power of Now

The West Wing – I’ve no idea why this made the list, other than I watched it obsessively for two or three years.

Journal Writing and the Wish Jar – I’d write in my journal and anytime I came to a point where I was writing about something I wanted to happen in the future, I’d write it on a small slip of paper and put it in a jar, then I didn’t need to dwell on it. It was safe for the future. (I might have stolen this from the Artist’s Way by Julia Cameron – yet another tool – or I might have made it up, I can’t remember)

When I say journal writing, I think – ick – I hate the sound of it and the thought of it, but I sit down and do it anyway.

The future is not next week, next month, next year – it is NOW. Changes may take you well into the future, but there is no place to start but NOW. There is something in every moment, even if it’s just asking the question, what am I right now, what can I learn right now?

The future is NOW. And Now.

What are your tools? Post them here, I’m always looking for new tools.

1 thought on “today is the future”