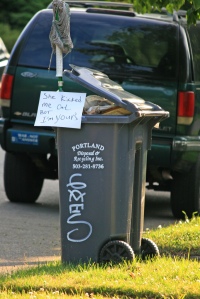 My father used to say to me “Look at this stove, it’s not clean enough.” after I finished wiping down the stove.

He’d add “Amy, don’t you want to be the best in the world at cleaning the stove? You need to try harder.”

I never engaged with him in dialogue about such things – arguing with him was almost NEVER worth it. There was this one time, while winding a garden hose in the “not right way” that I yelled back at him “Do it yourself then!” and dropped the hose and walked away. THAT was a spectacular moment.

Most days though, I’d think what I would say – “No, I don’t want to be the best in the world at cleaning a stove, ever.  When I’m older, I’ll hire someone to do that.”

It turns out that he was right and so was I.  I didn’t and still don’t want to be the best stove cleaner in the world. While I was home for 16 weeks on unemployment, I was watching my money, so I cleaned and paid attention to the details myself. I wouldn’t say I’m the best cleaner in the world, but when it’s a priority I do a damn good job. I still think of my Father when I clean the stove.

I think what he was trying to say is – find something you love doing and do that to the best of your ability, but he didn’t know the right words to say. What he forgot to mention was – first, if you are doing something you love, it doesn’t always feel like work, it will somedays, but when you get those moments of inspiration that feel like this is what you were meant to do, it doesn’t feel like work. What I was trying to say back –was you can and should outsource the things you don’t want to do.

Having a clean house is a priority, but me cleaning the house is not. Paying for a person to do what I am capable of doing seems counterintuitive. It seems like a luxury that I shouldn’t give myself. But then I remind myself:

Why shouldn’t I have such luxury?

The person who cleans my house left a note after their first day that said. “I love cleaning your house!”

I think that’s awesome, they’re doing what they love and I’m doing what I love. We’re both happier people.

It’s not often that I can appreciate my Father, but for this one little moment, I appreciate the fact that we were both right.

What can you stop doing that you don’t love and hire someone to do?